The Impact of Inflation on Consumption 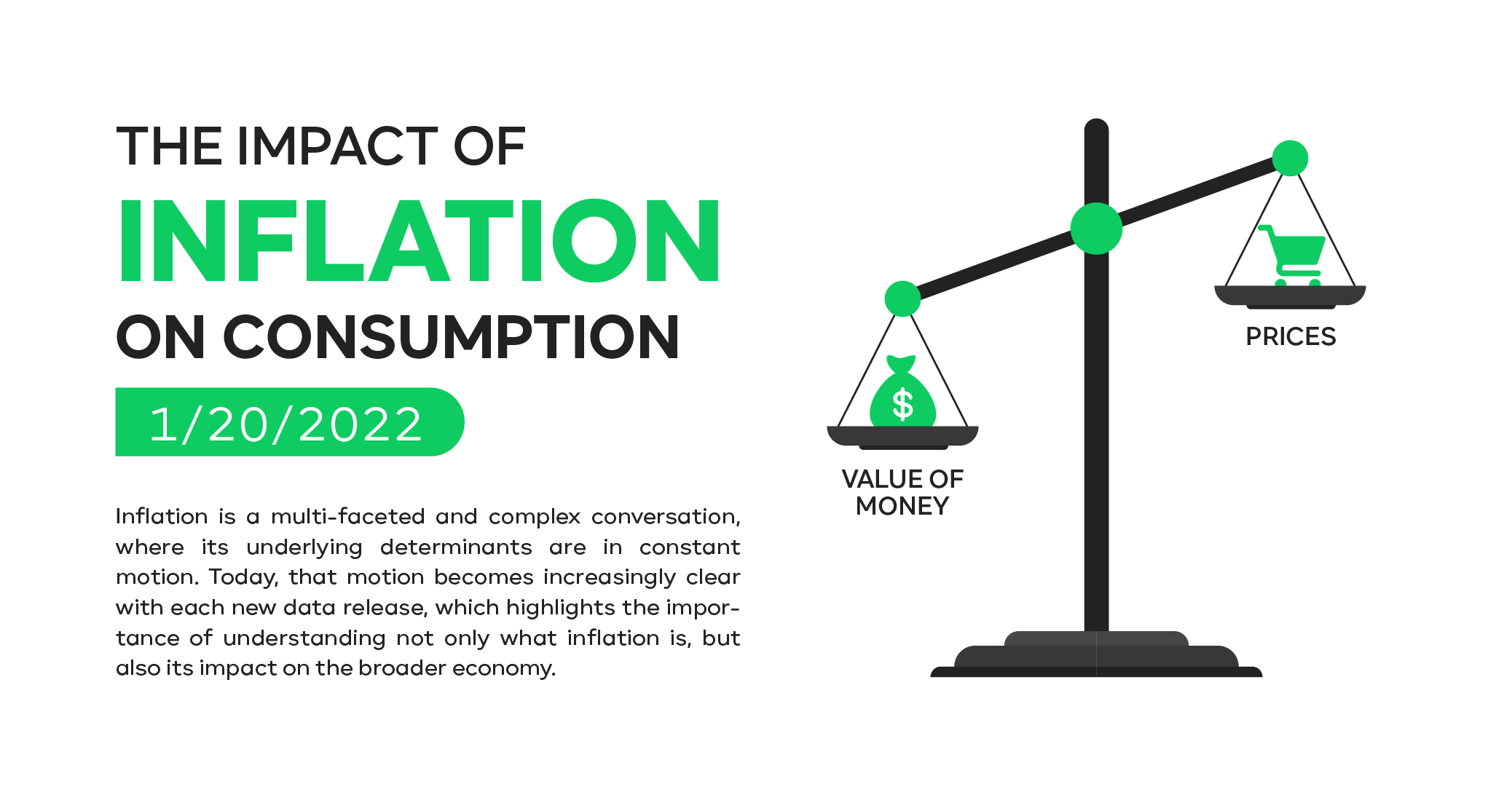 At a high level, let’s first observe that gross domestic product (GDP) is 70%  consumption. Said another way, consumption is simply you and I buying things. These things can be daily routine staples, a new car, or a household appliance, as well as any services and other non-tangible items. Clearly, in order to consume you must have income, or otherwise have the capacity to spend. Fundamentally, inflation erodes that capacity through rising prices that increase faster than your income. This all becomes a  part of the US GDP.

As we discuss this, it’s important that we do so in the context of how inflation impacts patterns of consumer behavior. If inflation rises faster than your income, then consumption generally declines. If consumption is weaker than expected, then products aren’t being purchased, and if companies aren’t selling more products and services, then revenues are lower than expected. Ultimately, the markets re-price for the risk that a given stock may be too highly-priced for lower-than-expected revenue results. Therefore keeping an eye on inflation, as it pertains to consumerism, is very important if you’re an investor.

Presently, inflation has been rising significantly, and 2021 is a clear demonstration of this increase. From December to December, inflation at the producer level was higher by 9.7%. Prior to that, we saw a reading of 9.8% from November to November. This was a modern-era record high for inflation at the wholesale level. The components behind wholesale inflation are many, with factors like supply chain disruption continuing to add to inflationary pressures; That is only part of the equation though,  and frankly, it’s not the largest culprit in my opinion.

US GDP and US Wage Growth

From the Federal Reserve Bank of St. Louis, our M2 money supply has ballooned significantly, which has resulted in a precedent-setting amount of dollars currently in circulation. This is adding, in my opinion, the greatest upward pressure to the inflation that we can measure at the present time. This is not showing signs of abating, as all 10 of the leading economic indicators continue to reflect higher inflationary pressures.  While I can’t guarantee continued inflation, for this reason, I am reasonably sure that subsequent readings on inflation at the producer level over the short term could very well be higher than what we are observing right now.

As for what we as consumers will feel, while it is not a perfect translation that which you see at the producer level will ultimately be felt at the consumer level.

From December of 2020 to December of 2021, consumer inflation was higher by 7%.  This was a level of inflation that we have not seen since 1980, and because of what I  can see at the producer level, I am reasonably sure that we will continue to see higher inflation at the consumer level over the short term ahead.

Recent headlines in business media have floated the idea that US wage growth was keeping pace with inflation, which is then a healthy sign of a growing economy. 7%  inflation at the consumer level would be fine if your wages increased by 8.25% over the same period. That would have to happen so that after taxes, you are able to just tread water and keep up with the higher cost of living. For the vast majority of us, that did not happen. US wage growth was not keeping up with inflation.

From November to November, across all nonfarm payrolls, US wage growth was 4.9%  on a gross basis. After-tax, let’s assume that you kept 4.3% of that increase. As we have just observed, the cost of living has risen by 7%, so if the increase in wages reflects your capacity to spend, then we now have a negative capacity to consume relative to previous years. It is also worth noting that there is a difference between income and wages. Wages simply reflect what you earned. Income also includes anomalous items like the child tax credit, pandemic unemployment compensation assistance, and other, one-off items that originated from the CARES Act in response to  COVID.

Warning: Your Household Income Might Be About to Fall  Significantly

On January 17th I noticed the above headline, and within the article, we learned that just recently Congress failed to renew the child tax credit. Starting on January 24th, there are roughly 30 million families who will notice their income declining because of the absence of this anomalous piece of income. Contrary to what the headlines might suggest, for many of us the increase of our wages is of greatest importance, and that is not keeping up with the cost of living. While consumer inflation has increased by 7% over the last year, that is not a uniform distribution across all economic sectors. Energy is a prime example of the disproportionate impact that inflation can have across daily life, as it included certain economically inelastic things that you absolutely must consume and do so in consistent quantities.

You drive to work, take the kids to school, go to the grocery store, and in doing so consume fuel in many ways. The cost of that fuel is higher by 50% over the previous 12 months.

This is taking an increasingly greater chunk out of your spendable income for a  commodity with which you cannot do without. Furthermore, food prices are sharply higher due to scarcity of materials and labor, and because everything that you purchased the last time you went to the store was not delivered on an electric truck.  Fuel touches every aspect of our lives, and in the case of inelastic commodities such as food and energy, if you are required to spend increasingly greater amounts of money on these things, that leaves you with that much less to spend on discretionary items.  As we have just seen, the cost of those discretionary items is rising at a rate faster than your ability to consume them. 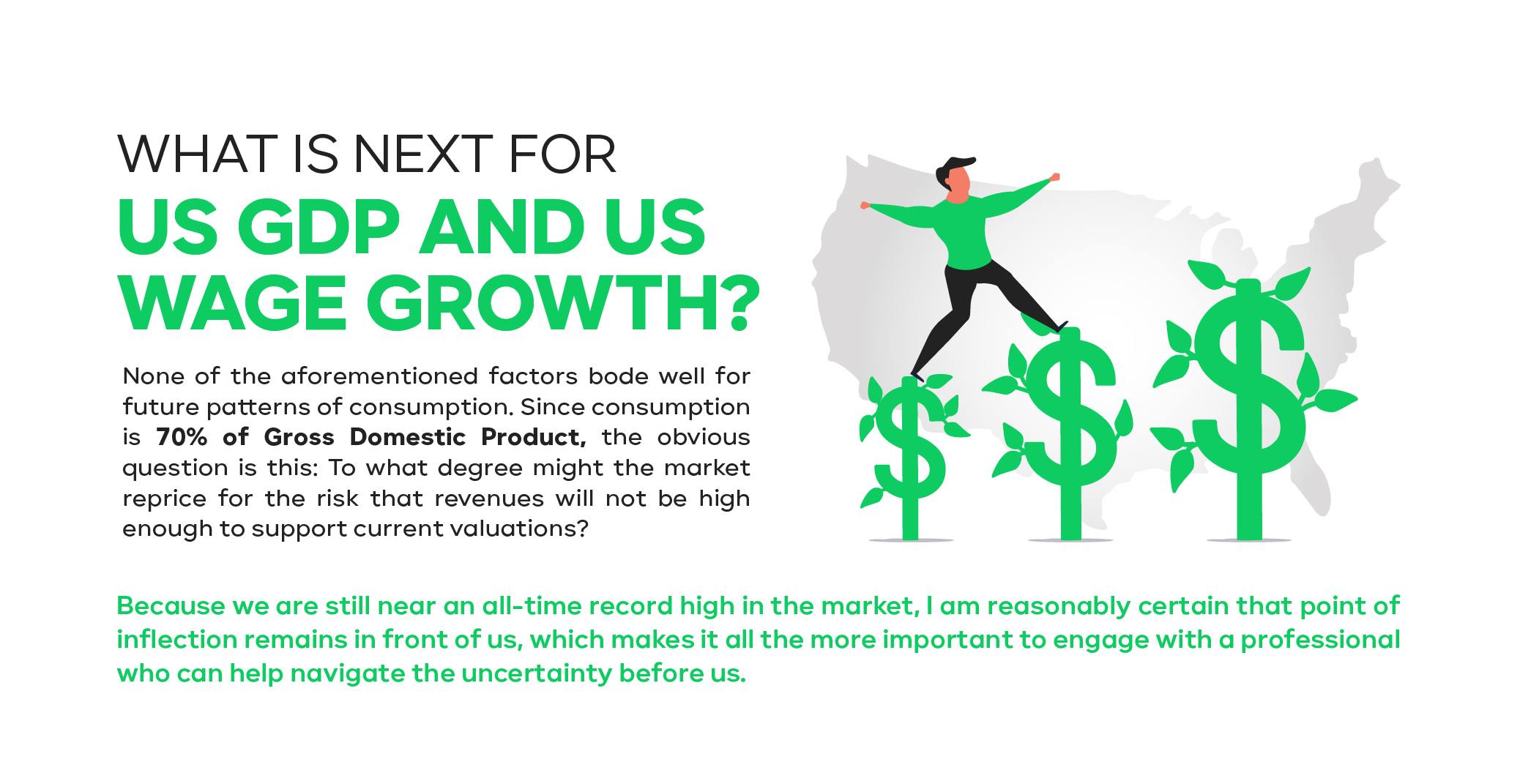 David Guttery and Brandon Guttery offer products and services using the following business names:  Keystone Financial Group – insurance and financial services | Ameritas Investment Company, LLC (AIC),  Member FINRA/SIPC – securities and investments | Ameritas Advisory Services (AAS) – investment advisory services. AIC and AAS are not affiliated with Keystone Financial Group. Information provided is gathered from sources believed to be reliable; however, we cannot guarantee their accuracy. This information should not be interpreted as a recommendation to buy or sell any security. Past performance is not an indicator of future results.