When Will the Markets Stabilize? What We Know So Far 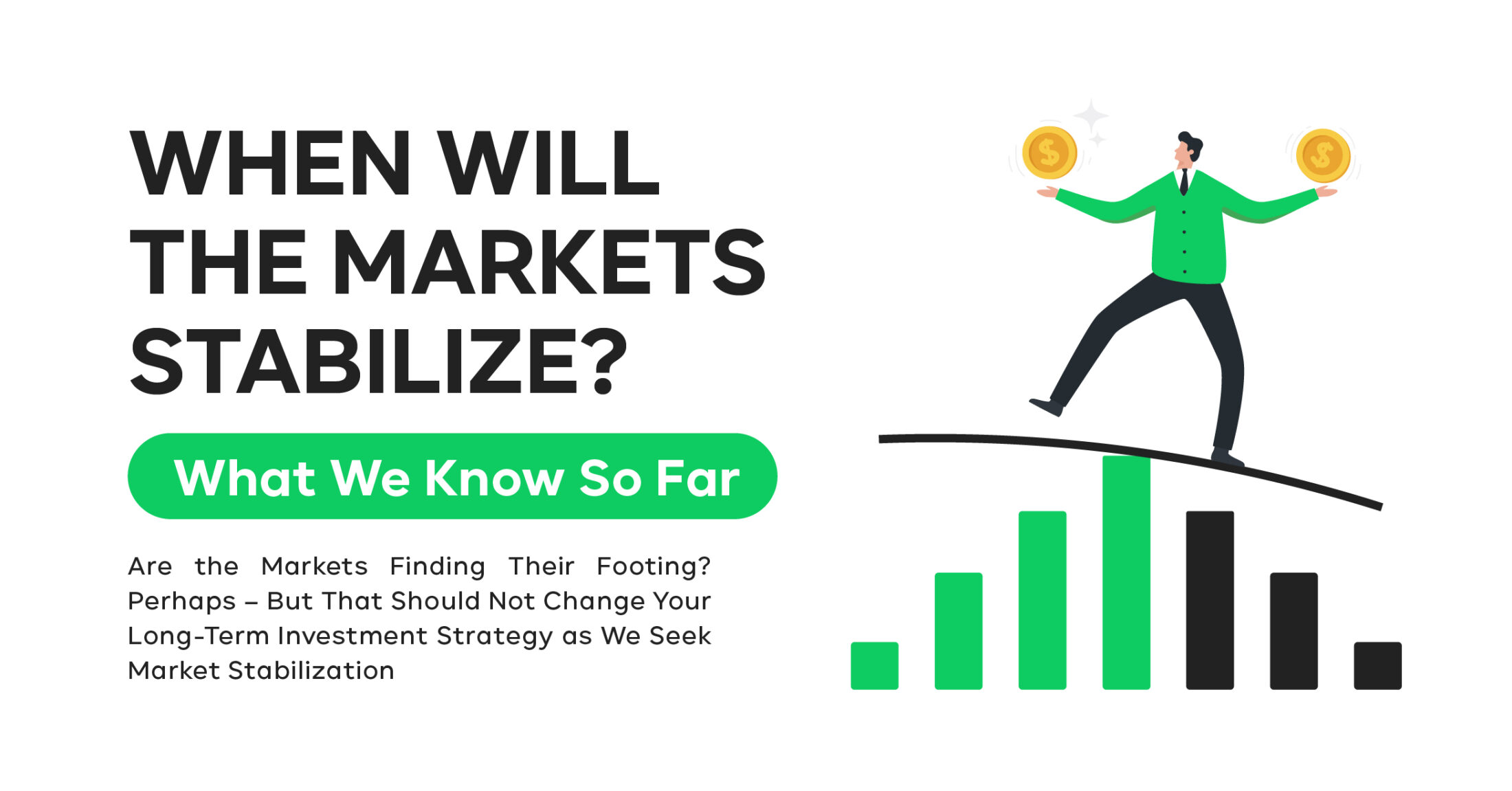 Are the Markets Finding Their Footing? Perhaps – But That Should Not Change

Your Long-Term Investment Strategy as We Seek Market Stabilization

Just 30 days ago, and two weeks before the last Federal Reserve meeting, I suggested that the Federal Reserve would find itself with the latitude that it needed to just simply blink when it came to setting critical economic policy — not pivot, not pause, and certainly not cut interest rates. Instead, the Federal Reserve Bank meeting would show that the board intended to be less hawkish with what remains of their strategy for tightening. This turned out to be correct — which is good because Federal reserve interest rate hikes impact us all.

Are the markets finding a bottom part 2

Are Markets Finding Their Footing? -Con’t

Indeed, that is what Chairman Jerome Powell, the head of the board, indicated in his post-Federal Reserve meeting press conference, and that is what was also reiterated when the minutes of the meeting were released soon afterward. Those indications point to my belief that global markets have over-priced the idea that central bankers were blindly hawkish — a position that I think helped to create dangerous assumptions about the potential that we could face a serious, long-lasting recession, and a lot of subsequent bad Dow Jones stock market news.

Until recently, it seemed that the vast majority of the world’s central banks were following the same patterns of economic tightening and were working off the assumption that this would continue without regard for economic deceleration and negatively impacted economies and the stock market. For a while, the Fed rate hike was all we seemed to hear about.

As I said last month, the Federal Reserve is not trying to control inflation. Why? Nothing about the previous four 75-basis-point Fed rate hikes had a material impact on the cost of living, and the argument could be made that it actually made the cost of living even higher than it was before.

Instead, what the Federal Reserve is trying to do with the Fed interest rate hike is disincentivize lending and borrowing, and over time, the hope is that this will dampen inflation.

Accepted economic theory states that inflation occurs when too many dollars, chase too few goods. The Fed is trying to create an environment where fewer dollars are chasing the same number of goods. If they’re not careful, then during the process of disincentivizing lending and borrowing, they might disincentivize production as well, which would leave us in an environment where we have fewer dollars chasing fewer goods. This is the definition of stagflation, and the Fed is trying to avoid this and its impacts on the stock market today.

Here is a high-level example of how this works. Imagine an entrepreneur who wants to manufacture a widget and bring it to market. The entrepreneur must determine the amount of money to borrow in order to build the plant, then buy the capital equipment and hire the people to run the machines. This is done under the assumption that the plant is to manufacture and distribute one million units at a price of $1.50 each, with the goal of seeing an internal rate of return of 8%.

But, imagine that then the Federal Reserve changes the equation by raising the cost of capital from 2% to 7%. Now, the entrepreneur has to rework the business assumptions, and by figuring those into the equation, that means raising the selling price of the widget to $2.25 in order to maintain the same internal rate of return. But, at that price, selling a million units seems less likely. If the entrepreneur keeps the price at $1.50, then the internal rate of return falls to just 2%. What happened? The Fed just disincentivized borrowing.

The Federal Reserve’s actions are also working to disincentivize banks from making new loans. Since there are fewer dollars available to be loaned, each new loan is more important to the bottom line and therefore riskier for the bank to make. Lending restrictions are already increasing relative to where they were in November 2021, when tapering began.

As we can see, the Fed isn’t directly trying to control inflation. Instead, the board’s actions are aimed at controlling the supply and velocity of money, which over time should slow inflation. As I thought previously, the idea of a haphazard Federal Reserve that tightens the money supply without regard for economic impact was absurd. It makes more sense that the board would be more gradual as they sought to tighten money lending and price growth. Just a month later, it would appear that smart economic policy won the day.

Economic Tightening Is Resulting in a

Last month, I also suggested that if indeed the Fed was more aggressive with its tightening, one byproduct of those actions would be a weakening dollar.

The dollar has been at all-time highs against a wide range of currencies for months and longer. On cue, in early November, after the Fed’s meeting, the dollar started to fall against several currencies and the Dollar Index had its worst day since December 2015.  If a stronger dollar caused markets to negatively reprice the risk of lower revenues that are the result of products being purchased with weaker foreign currencies, then logic would suggest that a weaker dollar would do the opposite. In my opinion, that seems to be happening now. Is This the Economic Cooling We Have Been Looking For?

Last month, I noted that the current cycle of tightening is the most restrictive that the U.S. economy has seen in 35 years. This is playing out in some notable ways.

The assumption that the Federal Reserve wasn’t cognizant of such metrics as they pursued targets of tightening was not justifiable in my mind. A less hawkish policy stance may cause negative trends in housing for example to ease as well, and therefore cause the markets to reprice the risk that maybe previous assumptions were wrong. 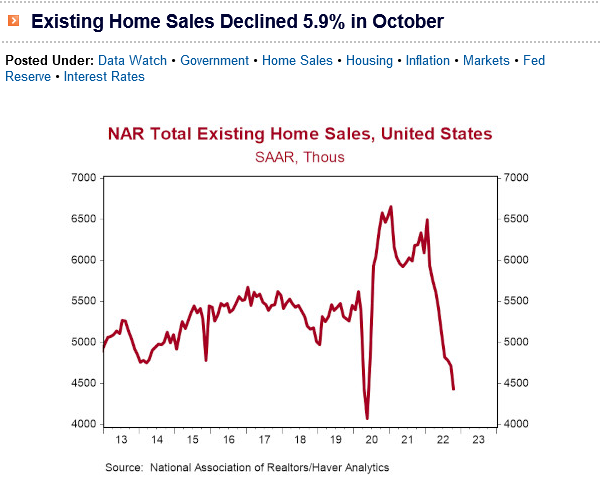 With the Housing Market Slowing, Is

Housing is just one major economic area where we can see the impact of Fed policy. When it comes to manufacturing, we are very close to contraction territory. Looking at the services side of the economy, we are slightly higher above the expansion and contraction line, but the rate of decline appears to be even steeper.

I could provide many other examples of metrics that illustrate economic deterioration. Rising bond prices, rising mortgage rates, and contracting manufacturing are some of the more important macroeconomic metrics. I believe that a less-hawkish Fed signals to the market that those in charge are indeed aware of just how hard the economy is struggling to expand, or the amount of contraction that is taking place. Because I believe the Fed wishes to avoid stagflation, such data will weigh heavily on future actions taken by the Federal Reserve, and the market is already reacting positively to this development. 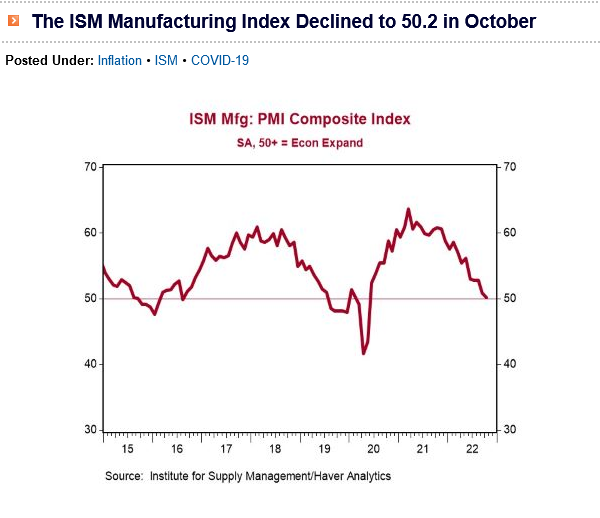 So What Should Investors Do Now?

Recently, I referenced a chart that depicts the emotional states of being across the economic cycle.  I suggested then that I thought we were drawing near to the capitulation phase, and 30 days later, I believe we have increasingly greater and measurable evidence that suggests this may be the case.

This is important, because if we are indeed coalescing around a bottom, now is the time to get into the market. Those who are not in the market risk missing out on the gains that appear increasingly likely to occur.

For this market recovery, what quantifiable data do we have today that wasn’t so clear even 30 days ago? Last month, we talked about stochastics, and how this, at a high level, is the art of observing patterns of behavior and connecting those dots, to form patterns, or Bollinger bands, from which insight may be gleaned.

So, let’s take a stochastic look at the market. According to recent data, it appears that we have bounced off the same Bollinger band four times: in February, May, July, and September. This occurs when markets signal that they feel that risk is adequately priced. When this happens twice, it is encouraging. Happening three times is exciting. If you see a quadruple bottom, pay. I have felt lately that global markets had collectively priced more risk into market valuations than was rational.

I believe markets were priced in anticipation of a long and deep recession. If this is indeed the case, then, as we bounce from the same Bollinger band a fourth time, how would the markets positively retrace these losses if indeed reality turned out to be different from those assumptions, and hence why the Fed was a critical piece to that puzzle a few weeks ago. This is not necessarily an actionable piece of data. But when viewed collectively, with evidence of a weakening dollar and hitting the same Bollinger band four times this year, and in comparison to all other bear markets, one can start to get the sense that maybe markets have been too aggressive at pricing themselves negatively.

Next, we start to look for evidence of capitulation — signs that the average investor got tired of the losses and decided to get out of the market.

I believe that happened in September, and data back that up. In September, the open put-to-call ratio hit its highest point for the year and was at a high that had not been seen since the economy shut down over COVID-19 in early 2020.

Further, the bull-bear ratio hit a low point in September not seen since 2008 and the Great Recession. We didn’t have this in July. Furthermore, mutual fund outflows spiked sharply in September, which is usually a characteristic of the capitulation we’ve talked so much about. So, let’s recap. By the end of September:

This is why you never want to give into the capitulation compulsion.

If you capitulated at the end of September, then you likely missed the best October that we’ve seen in 45 years. For context, I was in second grade the last time we had an October that was this positive.

So in conclusion, regardless of the period of time or the state of the economy, the achievement of long-term financial goals hinges on the consistency with which you implement your strategy.

The composition of your investment accounts will naturally change to reflect current periods of time and your age, but the approach, dedication, and commitment to the strategy should be unwavering. Even missing a few years can have a detrimental impact on your earnings, not just today but years and decades down the road, and seriously impact the success of your long-term wealth-building plans.

I know that everyone is weary of this strange and unique year, but I believe that we’ve seen a point of inflection, and now is the time to have the conviction and intestinal fortitude to continue working through periods of time such as this and avoid the risk that comes with riding this emotional roller coaster.