I believe that we are at a point of inflection where risks of various types are weighing on the market as we remain relatively near all-time record high levels.

What Are the Main Areas of Risk for the Financial Markets?

Broadly, I would suggest that the three main areas of risk that are of concern today. The following areas of risk will be covered in detail below:

China remains to be a relevant geopolitical concern.  Neither the U.S. nor China seems to be fully living up to the tenants of recent trade agreements.  China remains an irresistible vacuum for international business, however, it comes with the cost of forfeiting intellectual property and trade secrets.  Recently, China has seemingly taken an antagonistic approach.  Last week, American ships came into contact with Chinese nuclear submarines off the coast of Alaska, and Taiwan escorted nine Chinese warplanes from its airspace.  If China attempted to assert its will militarily against Taiwan, how might the US and the world respond?

Russia remains concerning.  Last year, the Trump administration imposed a moratorium on the import of Russian oil.  Today, Russian oil imports are up 150% from where they were a year ago, and those imports are met with tariffs.  The U.S. is more dependent upon foreign oil after many years of self-reliance, as domestic production has declined in the face of tighter EPA restrictions.  It’s unnerving that the members of the OPEC plus nations, Saudi Arabia, and Russia all declined the request of President Biden to produce more oil in August.

Because of our higher dependency on foreign oil, the Middle East is back into the geopolitical picture again as well.  Given the recent events in Afghanistan, new cultural and religious alliances with the Taliban could potentially destabilize relationships between the United States and countries of the Middle East upon which we’re dependent for higher amounts of imported oil.

North Korea remains of concern, and just recently, they successfully test-fired the longest-range missile to date.

If any of these geopolitical areas of concern were to devolve into a crisis, it could reverberate around the world.

On the inflation front, for the second year over a year period in a row, we have observed higher inflation at the producer level than ever before.

Inflation and the Cost of Manufacturing in 2021

From August to August, inflation at the producer level was higher by 8.3%.  Said another way, the cost of manufacturing the things today that we purchase 30 to 60 days down the road, increased by 8.3% over the last twelve months.  The consumer price index rose by 5.4% from August to August.  That’s twice the average rate of inflation that we’ve experienced over the last twenty years. 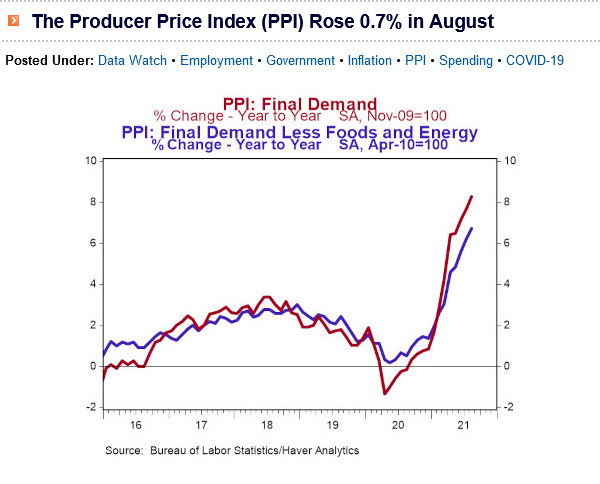 According to the most recent data from the Bureau of Labor and Statistics, nominal personal income, excluding extended unemployment benefits, has been barely positive.  Net of inflation, real income has noticeably declined.  Seventy percent of Gross Domestic Product is dependent on you, me, and everyone taking our income and buying things.

Prepare for a possible consumption decline

The market has priced into itself the assumption of a strong rate of GDP growth this year.  I’m not sure how we can expect consumption to increase, while real purchasing power is declining, costs of economically inelastic commodities like gasoline up 82% since May of last year, and with the potential for higher taxes on the horizon.

This is of concern to me because we are just off an all-time record high set by the market in mid-August.

We also have political headwinds.  So far in 2021, Congress has promulgated $7.1 trillion of new spending.  Roughly $3.5 trillion of it remains up for a vote in the form of an infrastructure spending bill.  On Monday, our Treasury Secretary, Janet Yellen, encouraged Congress to be mindful of the crises they’re trying to resolve, without creating a new crisis that is financial in nature.

The more the Congress spends, the higher the debt ceiling is raised, and the more debt we amass.  That debt is in the form of new treasury securities of which the Federal Reserve has been the largest purchaser over the last two years, The Federal Reserve has already expanded the M2 money supply by 36% since March of 2020.  As they continue to print money and purchase $120 billion of treasury and agency pieces of debt, the currency is debased to an increasingly greater degree, which means the dollar continues to weaken and inflation becomes of greater concern.

The Federal Reserve has a dual mandate, and the most important being the control of inflation.  I fail to see how they can be successful in meeting this mandate when spending remains so elevated, and the printing of money continues unabated. 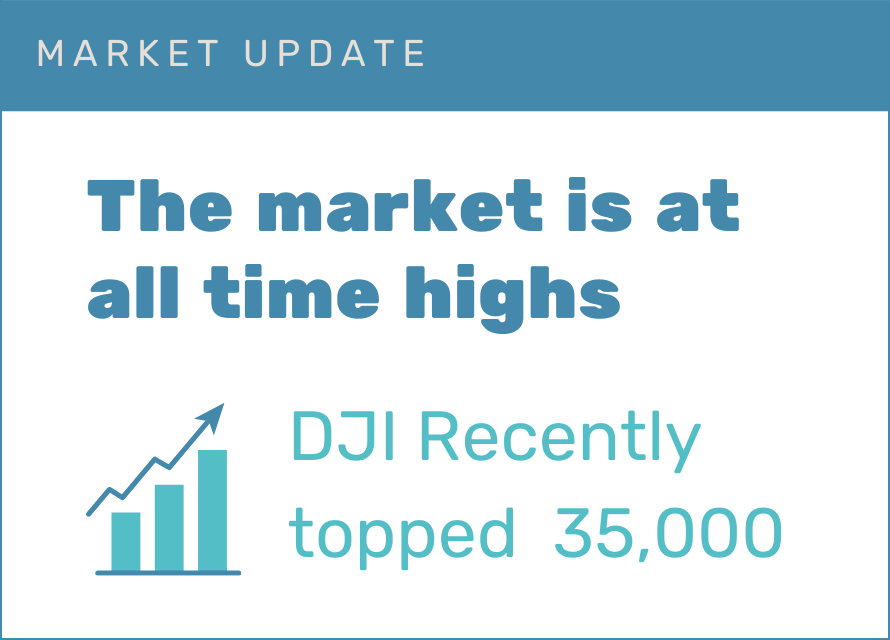 So far in 2021, we’re just fractionally off an all-time high across market valuations.  There are many geopolitical risks in the world that could devolve into more worrisome and problematic situations.  Inflation is at never-before-seen levels.  Real wages are not keeping up with sharply higher inflation, and thus consumerism is likely to be affected.  Consumers will likely curtail purchases of discretionary items, but not necessarily toilet paper and toothpaste for example.

The US Dollar Is Weakening

The Fed keeps printing money, and the dollar continues to weaken, and the Biden Administration is rolling out ambitious plans for tax reform.  Congress continues to spend money with impunity.  None of this is conducive to economic expansion.

The Conclusion From My Personal Perspective

Personally, I believe that we may well find ourselves in another recession within the next 18 months, and for reasons that I’ll cover in my podcast next week, it may be a shallow recession that lasts for an extended period of time.  As I’ve said on many other occasions, this is a marathon and not a sprint.  This is no time for an autopilot approach to investment management.  Economic conditions change, but with change comes opportunity and you need to be mindful of not only when but also why an allocation change might make sense when the data is sending clear messages.

(**) Data sourced from the Bureau of Labor and Statistics

(*) David R. Guttery, RFC, RFS, CAM, is a financial advisor, and has been in practice for 30 years, and is the President of Keystone Financial Group in Trussville.  David offers products and services using the following business names:  Keystone Financial Group – insurance and financial services | Ameritas Investment Company, LLC (AIC), Member FINRA / SIPC – securities and investments | Ameritas Advisory Services – investment advisory services.  AIC and AAS are not affiliated with Keystone Financial Group.  Information provided is gathered from sources believed to be reliable; however, we cannot guarantee their accuracy.  This information should not be interpreted as a recommendation to buy or sell any security.  Past performance is not an indicator of future results.