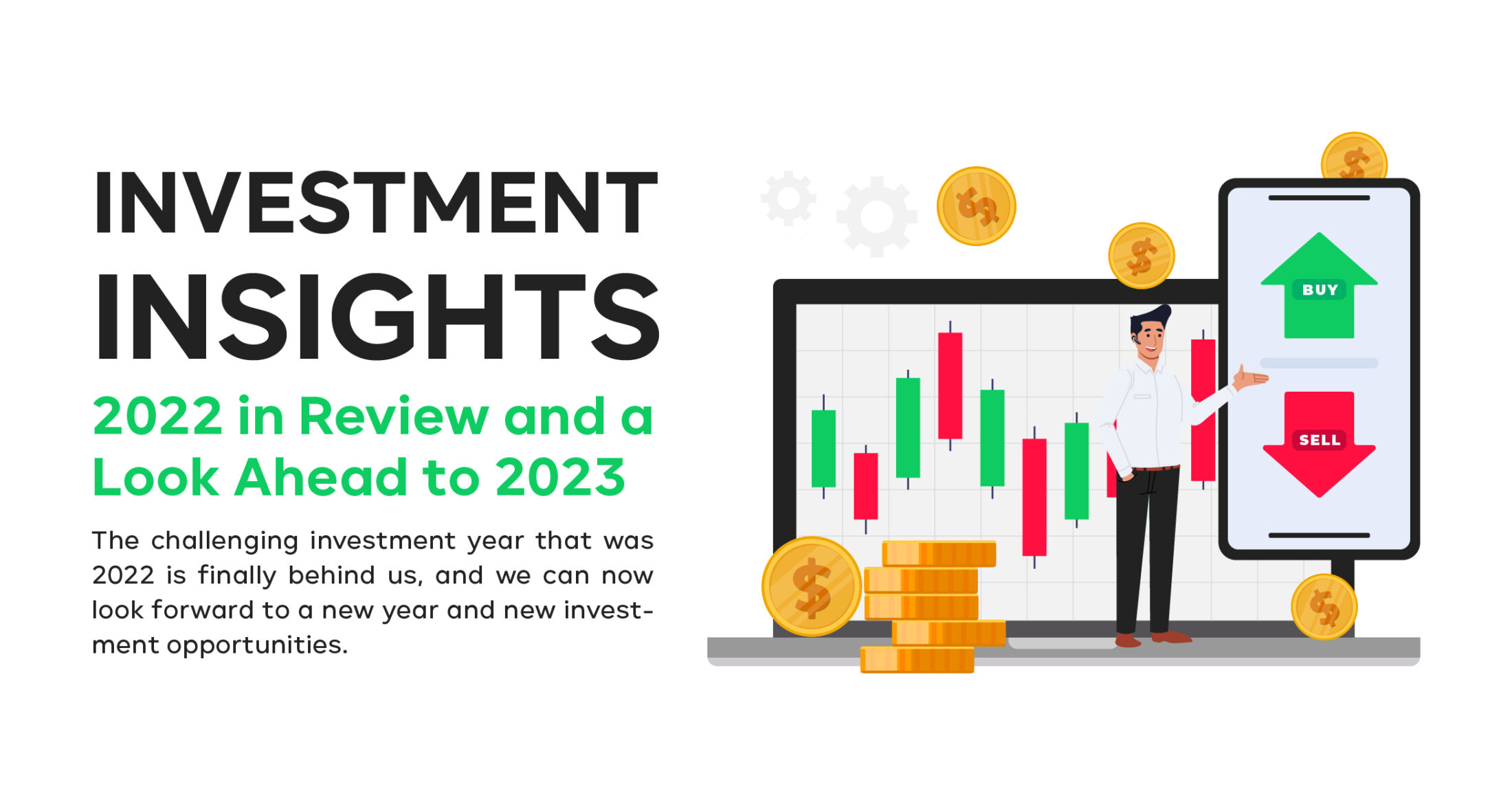 The challenging investment year that was 2022 is finally behind us, and we can now look forward to a new year and new investment opportunities.

2022 was marked by market volatility, and I believe that volatility was driven by the tendency for global markets to be shortsighted. But what caused this to happen? And what can we learn from it that we can apply as we look to balance our portfolios in 2023?

Investing in 2023: Understanding the Role of Inflation

But the markets got a big shock barely before the first quarter was up. In March, when the Federal Reserve laid out a schedule for a preset increase in the discount rate, the board also indicated how much it would begin to unwind its balance sheet. This shocked the markets, and almost immediately, the markets moved away from taking a long-term view to taking a very short-term view.

In my view, the Federal Reserve is and was aware of how tightening was impacting the economy, and I believe that the board wished to avoid causing stagflation. As illustrated by a survey from the Bank of America, most parties believed that the economy would wind up in a stagflation environment.

When a schedule for economic tightening is released early on in a year, the general assumption is that the schedule will be followed without deviation. Who can blame markets for coming to that conclusion when almost all of the world’s central banks are doing the same thing and doing so in tandem? This sends a strong signal that economic declines may accelerate, resulting not in a soft landing but in stagflation. The Fed’s Economic Target: Lowering the Price Index to 2%

It is unusual for the Federal Reserve to be in tightening mode while the economy is simultaneously contracting. It is even more unusual when these tightening patterns are more reactive than they have been at any point in the last 35 years.

On top of this, recently, Powell once again stated that the Federal Reserve was working to lower their personal consumption expenditures price index level to 2 percent, even though clearly we remain far from that target. When markets become short-sighted and fixated on a period of days, not months, it becomes increasingly easy to price too much risk into current market assumptions. That was the theme of 2022, and I believe that we are now starting to see evidence that markets may be looking more toward the long term than the short term.

2022: A Year of Firsts Even for Experienced Investment Professionals

I recently celebrated my 31st year in practice as an investment professional, yet 2022 for me was still a year of firsts. For example, a massive amount of money was printed during a relatively short 30-month period, and the Federal Reserve has worked to retain control following that. Meanwhile, Congress enacted new spending measures to support an economy that was essentially shut down for months.

The Federal Reserve has only recently begun to unwind its balance sheet. Printed money was used to purchase treasury securities as the country went deeply into debt to fund two CARES acts, the SECURE Act, a large infrastructure bill, recovery plans, and other initiatives designed to bridge the economic shutdown.

In addition, there is a glut of U.S. Treasury debt on the open global market right now. These treasury securities prices have been falling and yields rising as the Federal Reserve continues to unwind its balance sheet. This has resulted in fixed income and equities being positively correlated – and this is the first time this has happened since 1972. It has also resulted in a treasury yield curve that is more invented than at any point since 1981.

On top of all of this, the University of Michigan Consumer Sentiment Survey in 2022 reached its lowest level since it was launched in 1960. Meanwhile, the average household debt right now in the United States is at its highest point in the tool’s history. 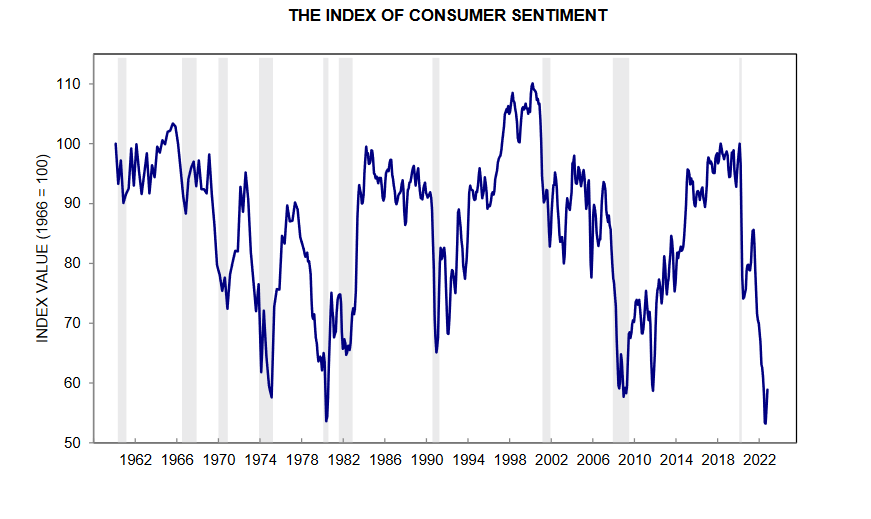 Putting Lessons Learned from 2022 to Work for a Prosperous 2023 These durable items, while certainly less exciting, include things that people will buy no matter what – razor blades, bars of soap, electricity, paper towels, health insurance, mortgage payments, gasoline, and other similar items. In fact, by focusing on relatively simple products and services such as these, it is relatively easy to touch on many major sectors of our economy but does so with relative safety. As seen in 2022 year-end tallies, many key sectors saw decent and even healthy gains, with standouts including consumer staples, energy, and materials. Meanwhile, other non-essential, or discretionary, sectors fell – and some fell rather dramatically. Big losers included technology, real estate, financials, consumer discretionary, and communication services. What \all sectors saw, however, was a recovery at the end of the year into positive territory after many months in the red. Focusing investments in sectors that people depend on nearly every day, and shunning markets built around things that people can do without – and will do without if they are short on cash – worked well for investors through most of 2022.

So, with 2022 behind us, what should investors look for in 2023? For one, I will be closely monitoring what the Federal Reserve does, and I hope to see their conviction to pursue targets of tightening in a less hawkish manner. If that happens, I think that economic markets both in the United States and in key countries around the world will be encouraged to return to something more closely resembling normalcy when it comes to discounting risk over longer periods of time.

What we saw through much of 2022 was the Federal Reserve being forced to act quickly, while the window of opportunity was open, and to react in ways that were uniquely tailored in order to address a precedent-setting inflationary threat. My hope is that the first phase of this effort is behind us and that continuing toward long-term inflationary targets can occur with less disruption to the economy and assumptions made by capital markets. This will support stability, economic trends that are easier to forecast and anticipate, and more earning potential for almost every sector.

So where does this leave anxious yet hopeful investors as we kick off a new year? In some ways, our outlook on investing should not change in 2023: Investment is a long-term process that requires diligent effort and broad focus. Keep in mind that no matter what period of time we are in, or what the state of the economy is, the achievement of long-term goals rests heavily on the consistency with which you implement your investment strategy. While it is true that the composition of your investment accounts should change to reflect current periods of time, your overall approach, dedication, and commitment to your strategy should be unwavering. I believe that we have seen a point of inflection, and now is the time to have conviction and intestinal fortitude to continue working toward your long-term retirement goals and avoid the risk that comes with riding the emotional roller coaster.