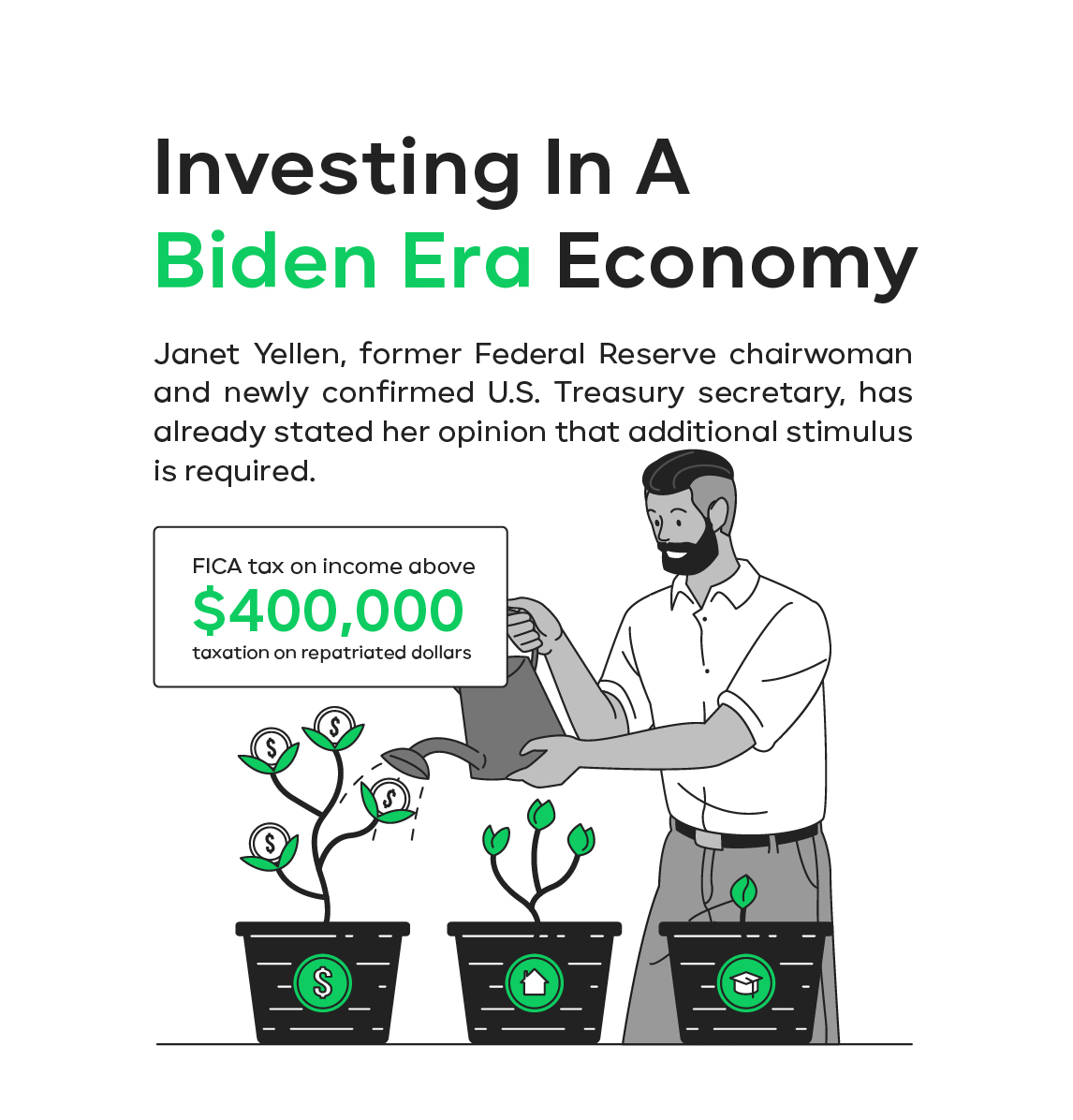 As Seen In The Tribune

A few weeks ago, we published an article containing a high-level overview of investment opportunities under the new federal administration. As a continuation of that theme, I  wanted to offer some greater depth on those thoughts and get you thinking about your financial plan, portfolio management, and financial planning.

As of the end of January, in my opinion, I believe we are already beginning to see some classic characteristics of market rotation. The ten-year treasury yield is noticeably higher over just the last four weeks, and the energy sector has risen noticeably as well,  as evidenced by crude oil. We are also noticing that market segments that lagged the rally in the previous year seem to be among the leading market segments in the early stages of 2021.  Click this video (Investing in a Biden Era Economy Part One) to learn more.

What Is Inflation: The Impact of Printing Money

Janet Yellen, former Federal Reserve chairwoman and newly confirmed U.S. Treasury secretary, has already stated her opinion that additional stimulus is required. By extension, we can assume that the Federal Reserve probably won’t depart from its accommodation posture anytime soon. To me, this means more printed money, with each newly printed dollar weakening the existing dollars and eroding your purchasing power.

Furthermore, we have heard about the potential for corporate tax liability to arise, as well as a new FICA tax on income above $400,000, taxation on repatriated dollars, and other things that will factor into higher costs of production. Generally, those costs are not borne by companies themselves but instead are passed along to consumers in the form of higher prices.

Back to Basics…in Goods & Services

So, between additional stimulus, which will result in a weakening dollar, and higher taxes, which will add to the cost of production, we can expect inflation on at least two fronts that will impact the behavior of consumers.

Inelastic staples include items such as toilet paper, paper towels, dishwashing detergent, cereal, macaroni and cheese, soft drinks, bars of soap, utilities, and telecommunications. You will take an aspirin if you have a headache, turn up the heat to warm your home, talk on your phone, wash your clothes, take a shower, and consume paper products and other staples items, but you are less likely to buy a $7 cup of specialty coffee.

Likewise, as regulatory impediments influence capital expenditures at the corporate level, along with the additional burdens of taxation, we can expect the behavior of corporations to shift as well. At a high level, companies will become increasingly less likely to focus on the expansion of plant and capacity, and the ability to produce greater amounts of products, but will rather be incentivized to spend money in ways that increase the utility and the efficiency of the capacity that they already have. Therefore,  process automation, robotics, and information management will likely be areas that prosper while discretionary and non-necessary areas of expenditure will stagnate.

As we observed under the Obama administration, we can assume that the velocity of money will again decline. This is a characteristic of both corporations and individuals  being cognizant of potentially higher liabilities of taxation, and also that the remaining

amount of weakening, net spendable dollars will likely be purchasing fewer goods and services as inflation becomes a greater concern. 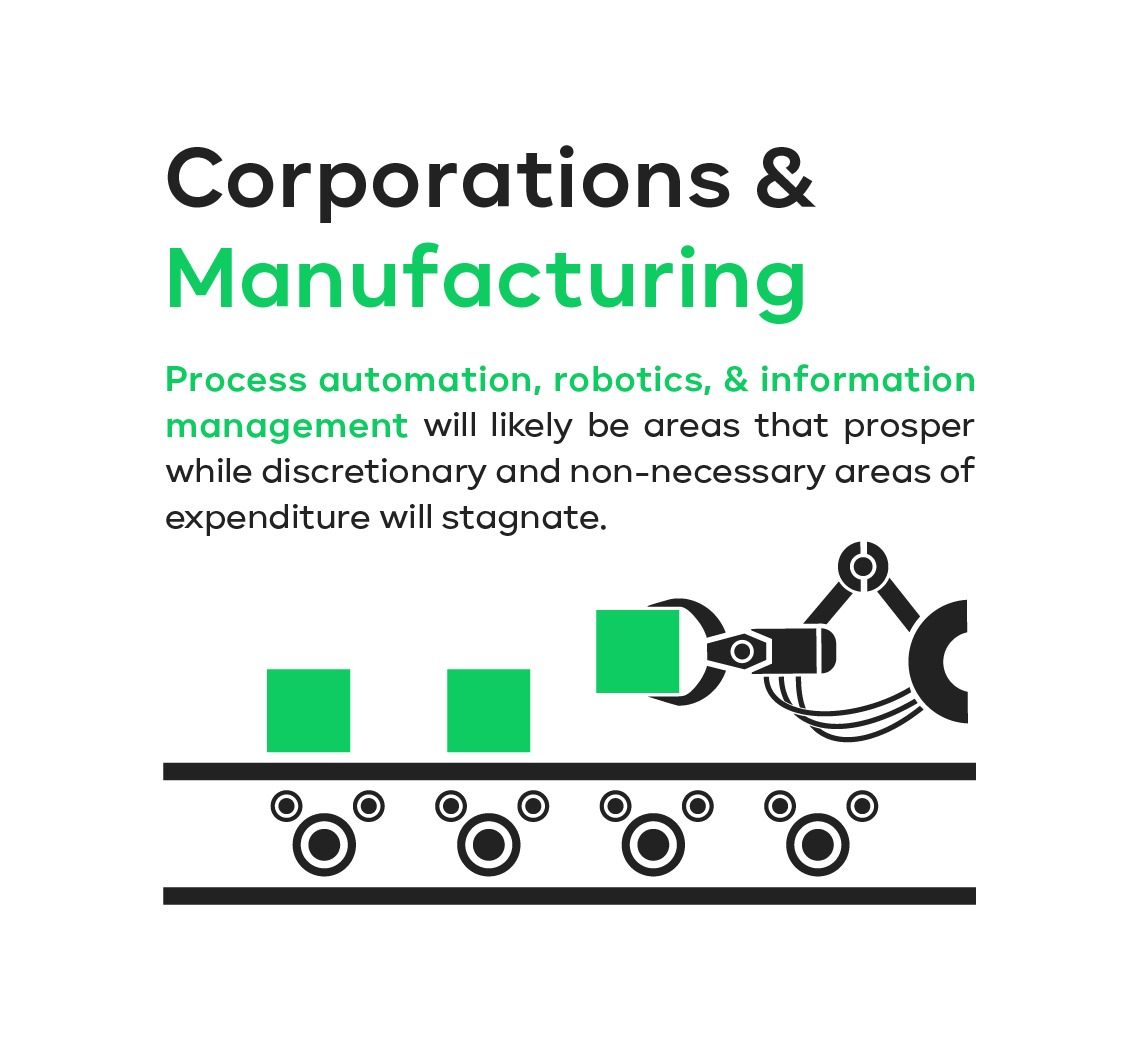 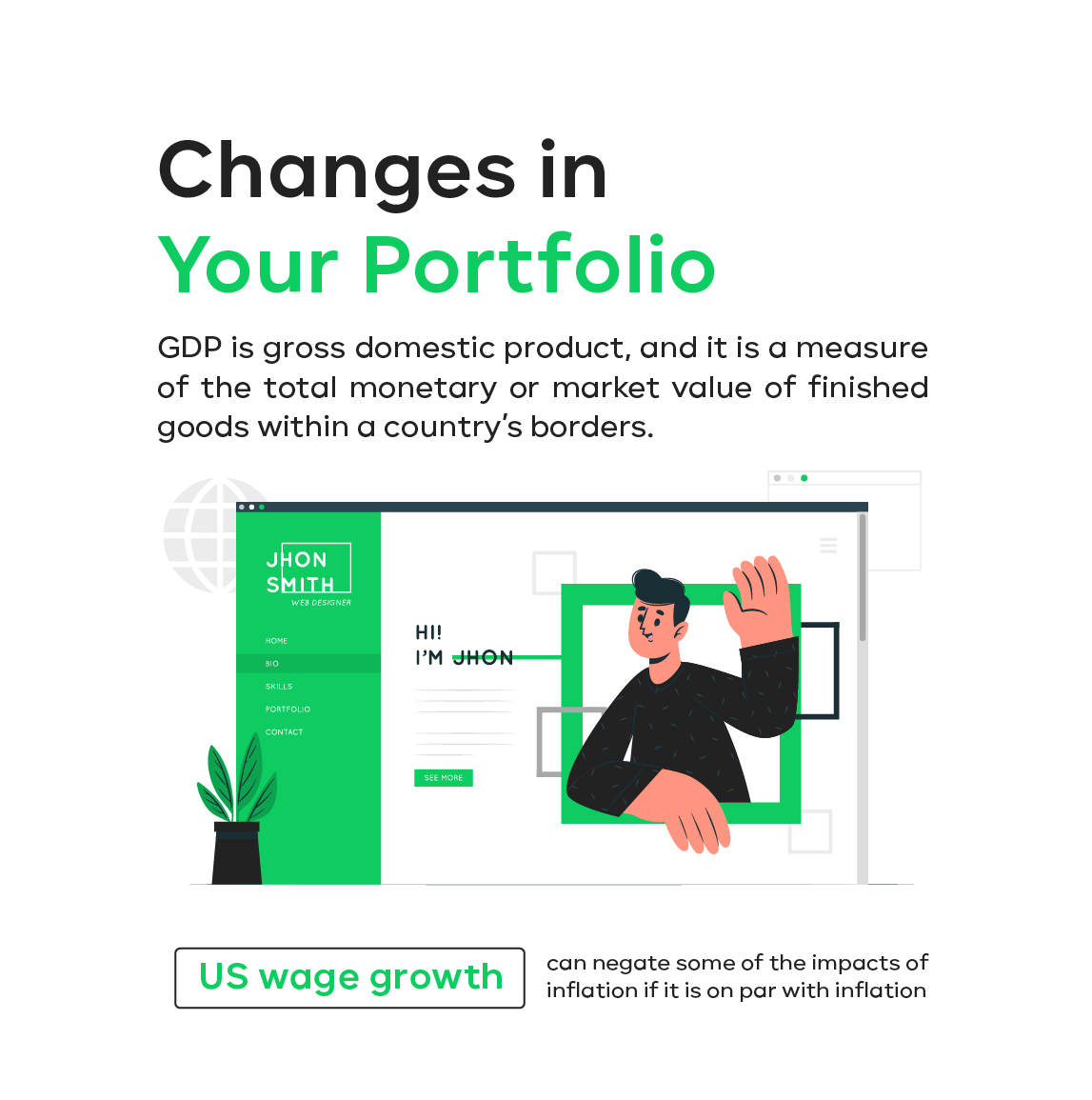 Changes in Your Portfolio

Let’s look at US GDP briefly. What is GDP? GDP is gross domestic product, and it is a  measure of the total monetary or market value of finished goods within a country’s borders. A real GDP formula is an inflation-adjusted measure of that figure that takes price change adjustments into account. US wage growth can negate some of the impacts of inflation if it is on par with inflation, though in the current scenario US wage growth is slower than inflation.

At a high level, I believe at this time it is a good idea for investors to be aware of US  inflation and the sector exposure concentration of assets within their investment portfolios. This might be a good time to shift away from large growth and high beta assets and instead focus on value-rated holdings that pay dividends, with a  concentration on economically inelastic staples as opposed to economically elastic discretionary goods and services.

As we mentioned in our previous article, seasons change. The shorts and t-shirts that you wore in July just aren’t a great option for the weather we get in January. Today, it is time for jeans and jackets. Patterns of behavior change as well, and what worked for you last year may not be appropriate or even smart today.

We also have the benefit of looking back to the Obama administration for insight on the types of investment opportunities that are smart decisions to make when faced with a declining velocity of money, higher inflation, higher taxation, stagnating wages, and tepid economic growth. We can assume that we will soon find ourselves in a similar economic disposition. I would encourage everyone to be aware of their exposure to economic segments as the seasons are changing and evaluate the merits of reallocating their investments accordingly. Clearly, this is a function of the risk tolerance of an individual, the liabilities of taxation on realized gains, and other factors.

If you work with a financial professional, connect with them to get an in-depth evaluation of your unique situation and your financial plan. If you are without such professional guidance and looking for help with financial planning in Alabama, including retirement planning and the establishment of retirement income, please do not hesitate to give us a  call.

David Guttery and Brandon Guttery offer products and services using the following business names: Keystone Financial Group – insurance and financial services |  Ameritas Investment Company, LLC (AIC), Member FINRA/SIPC – securities and investments | Ameritas Advisory Services (AAS) – investment advisory services. AIC  and AAS are not affiliated with Keystone Financial Group. Information provided is gathered from sources believed to be reliable; however, we cannot guarantee their accuracy. This information should not be interpreted as a recommendation to buy or sell any security. Past performance is not an indicator of future results.