Investigating the Question on Every Investor’s Mind: Where Do the Markets Go from Here? 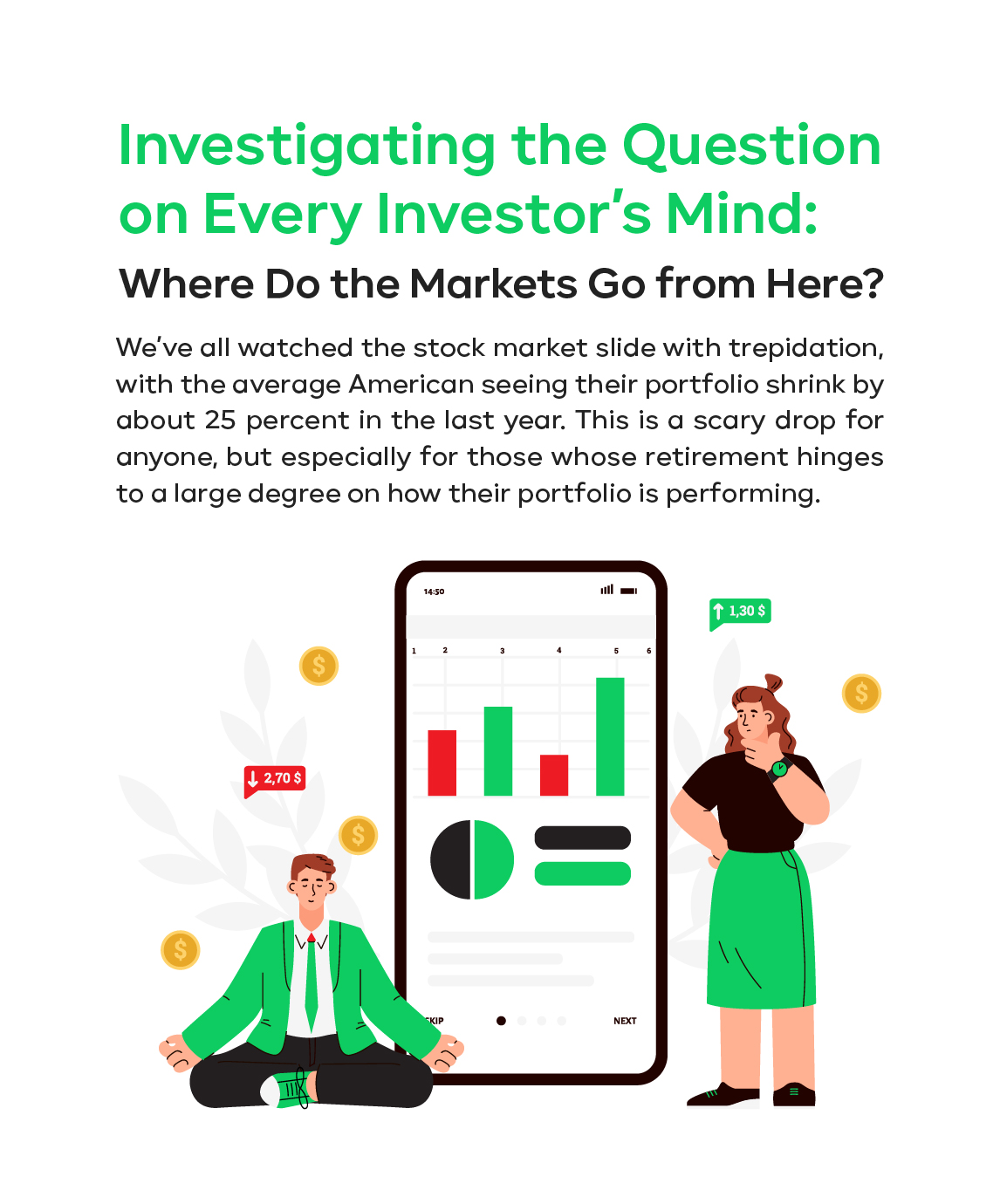 Has the Stock Market Reached Its Bottom? Let’s Take a Closer Look at This Burning Question.

We’ve all watched the stock market slide with trepidation, with the average American seeing their portfolio shrink by about 25 percent in the last year. This is a scary drop for anyone, but especially for those whose retirement hinges to a large degree on how their portfolio is performing.

While bear markets are not fun, they are always followed by a rebound, and sometimes that rebound is significant and makes up for previous market losses relatively quickly. We get this question all the time: when will the market hit bottom and start to go up? Let’s look at some leading market indicators as we try to gauge what is happening and what investors can expect in the coming months.

Are Equity Markets Forming a Bottom?

Are Markets Finding Their Footing?

Let me clearly preface this discussion by saying that I am not attempting to call a bottom to the market here. No one can do that, and as we saw happen over the summer, many well-known business media personalities declared that the market had hit bottom, only to see it slide even further. There is no easy way to accurately identify when will the market hit bottom until after it has already happened and we can look back at market levels.

However, I am encouraged by what I see as evidence that the markets are looking further ahead into the future and not being impacted as much by current events. We also have solid quantifiable metrics with which to judge the market that we did not have back in July. While I will go into more detail, here is the bottom line as I see it — yes, I am optimistic that markets may have found their near-term bottom. What Is Different About This Downturn? The Fed.

I am nearing my 32nd year of being in practice, and I have seen a lot over the years. One thing that is different with this stock market fall, though, is how restrictive and hawkish the Federal Reserve has been.

In looking at major cycles of tightening over the past 35 years, we see that the Federal Reserve has been more restrictive now than before, and has been so much more rapidly than at any point in the last three and a half decades.

It seems to me that markets have priced into themselves the assumption that the Federal Reserve will stay true to its path of 450 basis points and that this posture of tightening will not relent. I see things differently, however. We will find out in the coming weeks when the meeting minutes are released. Still, I believe that the Federal Reserve may find itself with the ability to pursue tightening targets, but with less hawkishness now that we can measure economic deceleration more accurately.

The Fed’s Battles: Inflation and Production

In my opinion, the Fed is not trying to control inflation right now. What they are trying to do instead is disincentivize lending and borrowing. If what they have done works, then the velocity of money should continue to decline and leave us with less demand.

The Fed wants to achieve this, however, without slowing production. For this reason, I think that the Fed may become less hawkish and pursue tightening at a lower rate. If they do, I think the market will respond positively.

Such action and response are important because what the Federal Reserve has done this year has resulted in the dollar reaching all-time highs against most foreign currencies. The strong dollar is one area where the market has already made adjustments. As goods are purchased with weaker foreign currencies, and those currencies repatriate as dollars, revenues fall.

Markets, meanwhile, are repricing risk as many market assumptions at play today were made a year ago when the dollar was not as high as it is now. If the Fed signals that it is going to be less hawkish, that could be what finally drives the dollar down, which would benefit equity markets. Already, some data show that the strength of the dollar is being tested and finding resistance. If this does play out, it could be one of the catalysts around which markets can coalesce and rise off of recent lows. Looking for Signs that the Stock Market Is Near Its Bottom

While I am not a statistician, I do see that there are stochastic indicators suggesting that markets may have already tested bottoms four times in 2022: February, May, June, and the end of September. While this by itself is not actionable data, when viewed with other metrics, it does show characteristic signs of the market trying to coalesce around a bottom.

At the end of September, only 3 percent of the S&P 500 stocks were trading above their 50-day moving average. This is notable since at the beginning of September that figure was above 90 percent. And while this was happening, we saw a significant increase in the ratio of open put-to-call interest. Normally, this indicates excessive fear, and we can verify it by looking at the VIX index, which recently touched a 52-week high at 38.94. On top of that, mutual fund outflows also spiked in September, which is what happens when the average investor looks at their losses and just wants out. Markets Run in Cycles: Where Is This Bear Market in Relation to Others?

When looking at all bear markets between 1929 and today, and charting the market median and S&P 500 levels against the number of days before and after the peak prior to the bear market, we can see that we are below the median for all cycles and at the bottom of all cycles this many days into the event. This suggests that markets are oversold, which has probably happened because markets have priced themselves into more difficult positions than we might actually realize.

When looking at a measure of emotions in relation to the stock market, investors tend to go from optimistic to exuberant, and this is when they take the most risk. This is followed by a fall in the market, but depression, apathy, and indifference actually come after the point of maximum opportunity for market buy-in have been reached. Simply put, most investors buy too late and sell too early. I believe we are close to the capitulation phase in the assessment of market emotions, and there is quantifiable evidence that this is indeed the case. This is important since if we are actually closing in on a market bottom, there is precious little time for potential investors to jump in and realize the major gains that typically follow a bear market period. Regardless of how much time has passed, or what the state of the economy is, the achievement of long-term financial goals hinges on your ability to create and implement a long-term investment strategy, one that can change slightly to reflect emerging market conditions yet is defined by an unwavering approach, dedication, and commitment to the strategy.

Markets endure periods of volatility — that is a fact that cannot be changed. Sitting out of the market due to fear of loss or volatility can have major detrimental impacts down the road when looking at your long-term gains. I know that everyone is tired of this strange year, but I sincerely believe that we are drawing near to a point of inflection, and now is the time to have the dedication and strength to accept the risk that this rollercoaster is bringing and be prepared to reap the rewards of the market’s inevitable upswing.